Cosmic Beams and Intergalatic Gems - Starburst is a Netent Golden Oldie! Starburst is one of the most popular casino slots, produced by Net entertainment.

Starburst was one of the first online slots to introduce the ‘Win both Ways’ which offers players many more chances to win, as the win lines run from left to right and also from right to left. You can win up to 50,000 coins playing Starburst.

Although Starburst is older now than some of the newer slots, Starburst is popular is a game for all and also great looking and great sounding.

How to Play The Starburst Game

From when you load Starburst slot, you’ll see some cosmic beams and the reels filled with starts and gems. The colours are really nice and the graphics clear. The theme of starburst is an intergalactic space universe to pay out come comic gems and coins. The music which accompanies Starburst is what we’d label as Futuristic and sets the scene perfectly.

Starburst slot is designed with 10 win lines and 3 rows with 5 separate reels. As we already said above the win lines go in both directions which the main object is to help you win more frequently. Starburst is a lower volatility slot because of this fact and perfect for all type of slot players.

First of all, just set the slot to your preferred liking, and in Starburst case, You can choose to bet from 1 to 10 coins per win line. The coin values are adjustable, choose from the following coin denomination: 1 cent, 2 cents, 5 cents, 10 cents, 20 cents, 50 cents, and 1 euro.

Once you have set the slot as per your liking, it’s time to get started and spinning on Starburst! We can recommend to check out this starburst guide for new players on youtube.

Bonus Rounds and Features Within The Game

Some casino players might feel a little underwhelmed when they play starburst as there are less features than some of NetEnts newer slots. But this can be a good thing – its pure slots playing and due to the win both ways, you’re never short of some cosmic rays in the form of wins and more wins! The main feature within the Starburst slot is in Starburst wilds and re-spins

Also, in a good extra twist if you thought ‘that was all’ is that if you get a new Wild symbol appear during this re-spin, this will expand again, like before and cover the entire reel, plus the other reels will start spinning again for extra win chances. The maximum amount of times this can happen is a total of 3 times and then after that, you’ll return to the normal game. 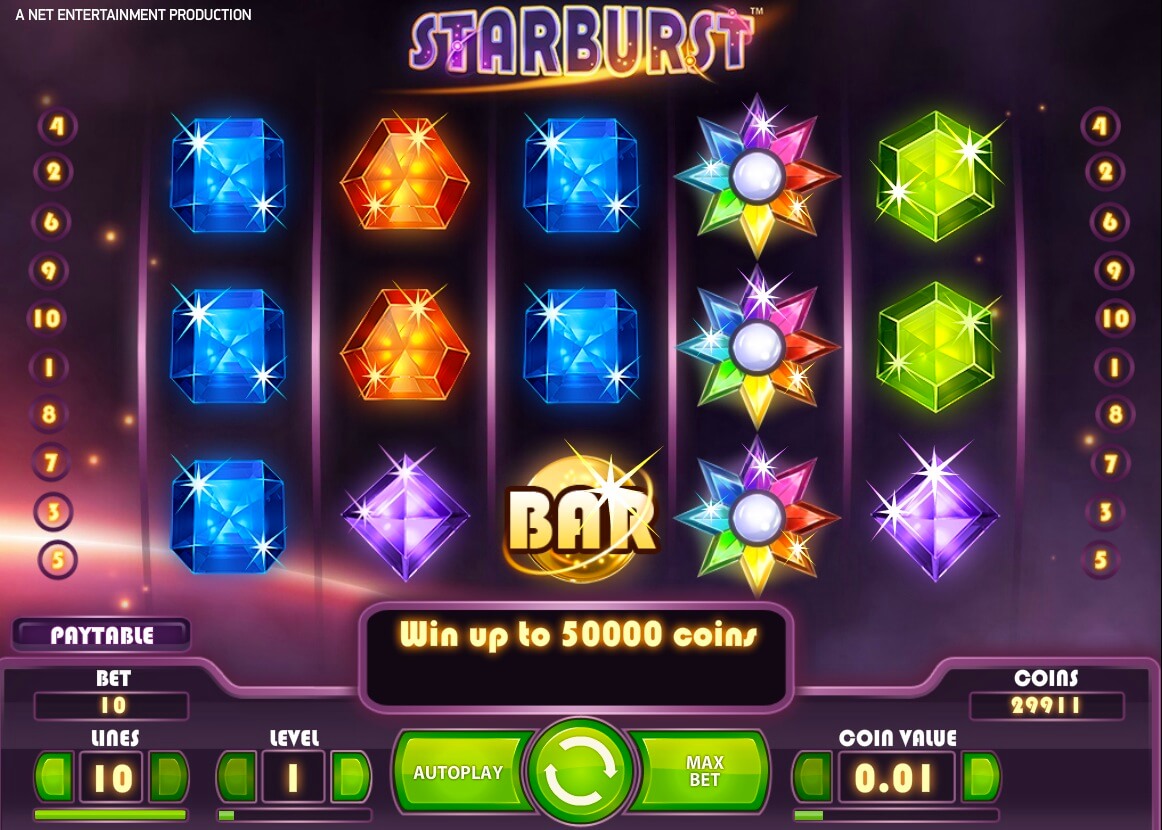 Great news for people who like to play whenever the mood takes them, as Starburst is available to play on mobile phones and devices and tablets. In fact it was one of the first slots that Netent themselves commissions to make in to their Mobile slot series: Netent Touch,

Not every slot gets made into mobile (this can be due to popularity, features, compatibility) but starburst is there and is a great online mobile slot. Starburst doesn’t lose any appeal in mobile form – in fact, it works and acts like it was made for mobile!

Starburst is a brilliant casino slot which is very popular for all the right reason. You can win frequently due to the expanding wilds and win both ways feature so try Starburst today so you know what all the fuss is about. See below for the best casino sites which offer Starburst and all other Netent Slots.